The last months and years have changed a lot - witihin china and the rest of the world. The pandemic has made shipping from china a risky undertaking. Not only have shipping costs risen to all time highs but it also is slower and more unreliable. More and more chinese brands want to sell their products by themselves and prohibit us to list them in our shop. The let the authorities confiscate parcels if their products are discovered. Regulations within china and also worldwide have changed so much we see no other choice as to stop doing business with consumers and only service resellers in the future.

Thanks for understanding and all the best!

The first Xiaomi phone with an under-display camera arrived! Typically for a device of the Mi Mix series, the Xiaomi MIX 4 is packed to the gills with innovations, including its camera under panel (CUP) technology, UWB connectivity, graphene cooling system, 120W charging speed, a 108 MP main camera sensor, and a 20MP under-display selfie camera. The Mi MIX 4 device has some high-end core specs too, featuring an all-new Snapdragon 888 Plus processor, a 6.67-inch OLED screen, 8GB DDR5 or 12GB of RAM, and 128GB/256GB/512GB UFS3.1 of storage. The premium phone packs a 4,500mAh battery with 120W wired charging and 50W wireless charging. The Android device is available in Ceramic Black, Ceramic White, and Shadow Cyan color options. Xiaomi has confirmed to CECT-Shop that the Xiaomi MIX 4 is a "Mainland China device only".

The main selling point of the Xiaomi Mi MIX 4 is its 6.67-inch CUP (camera-under-panel) full screen display with 120Hz refresh rate. The selfie camera sits below the panel at the top-center, and the LEDs are smaller in this area to facilitate it. The screen still offers 400 pixels per square inch in the screen area of the front camera, matching the rest of the display. The AMOLED micro-curved screen sports a full HD+ resolution (2400x1080p), up to 480Hz touch sampling rate, HDR10+ supports and houses a fingerprint reader to unlock the phone. Additional features of the 10bit screen include Eye protection mode, Sunshine screen 3.0, Auto brightness 2.0 with a peak brightness of 800nit and Corning Gorilla Glass Victus protection.

The Xiaomi MIX 4 is powered by the latest generation flagship mobile processing platform Qualcomm Snapdragon 888 Plus, including AI-enhanced gameplay. The most advanced 5nm process improves mobile platform’s CPU, GPU, and AI performance while lowering power consumption and heat development. The phone is equipped with a built-in cooling system to avoid overheating during intensive use and when charging. The SD888+ runs with Qualcomm's upgraded Kryo 680 CPU at lightning-fast speeds up to 3.0 GHz for seamless, robust performance. The octa-core chipset is paired with the Adreno 660 GPU delivering excellent graphics rendering for immersive, vivid gaming and up to 12GB LPDDR5 RAM. The China-only phone comes with 128GB, 256GB or 512GB internal storage supporting high-speed UFS 3.1 standard.

Xiaomi’s new flagship device sports a triple rear camera system, featuring a 108MP ultra-clear main camera (Isocell HMX) with OIS, 4-in-1 1.6μm large pixel output, and f/1.95 aperture. The additional camera sensors include a 13MP free-form ultra-wide camera with 120-degree field of view, and an 8 megapixel periscope lens with 5x optical zoom, 120mm focal length with OIS. The front-facing camera on the Xiaomi MIX 4 is hiding under the display. The under-display camera (UDC) is a 20 megapixel shooter making the Mi MIX 4 the first Xiaomi device with an under-display selfie camera. The CUP technology ensures that the camera area offers 400ppi, matching the pixel density, brightness, and color detail of the surrounding screen while the camera is virtually invisible to the eye.

The Xiaomi MIX 4 offers a built-in battery with 4500mAh capacity supporting 120W wired charging and 50W wireless charging. By default, the phone is able to reach a full charge in 21 minutes via wired charging and 45 minutes via Qi wireless charging. In addition, there is also a so-called Boost Mode, offering wired and wireless charging times of 15 minutes and 28 minutes respectively. The flagship phone also features “Point to Connect” Ultra Wide Band (UWB). UWB technology allows you to point your phone to any compatible Xiaomi smart home product to immediately connect it to your MIX 4 phone. Other notable features include dual stereo speakers, Hi-Res & Hi-Res Wireless Audio Certification, an IR blaster, NFC, Wi-Fi 6 Enhanced, dual 5G and dual 4G with FDD-LTE supporting band 20 (B20) with 800MHz and band 28 (B28) with 700MHz. The Xiaomi Mi MIX 4 runs Android 11 OS with MIUI 12.5 on top. 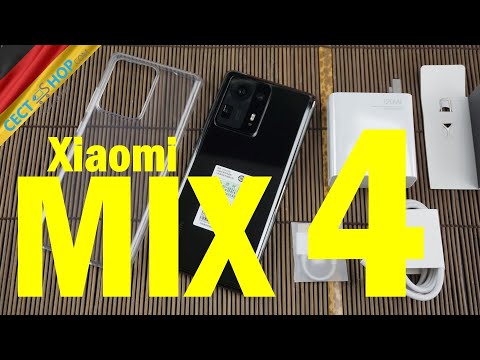